Alcohol abuse is highly disruptive of circadian rhythms, and circadian disruptions can also lead to alcohol abuse as well as relapse in abstinent alcoholics. Circadian timing in mammals is regulated by light as well as other influences such as food, social interactions, and exercise. A new study of the relationship between alcohol intake and wheel-running in hamsters has found that exercise may provide an effective alternative for reducing alcohol intake in humans.

“Alcohol abuse, characterized by routine craving for and consumption of alcohol as well as an inability to function normally without it, disrupts both the timing and consolidation of daily circadian rhythms – when to sleep, eat, and mate – driven by the brain circadian clock,” explained J. David Glass, professor of biological sciences at Kent State University and corresponding author for the study. “With continual alcohol use, one may go to bed too early or late, not sleep across the night, and have an unusual eating regime, eating little throughout the day and/or overeating at night. This can lead to a vicious cycle of drinking because these individuals, in response, will consume more alcohol to fall asleep easier only to complain of more disrupted sleep across the night and additionally have a greater craving for alcohol.”

In other words, said Alan M. Rosenwasser, professor of psychology at the University of Maine, chronic alcohol abuse and circadian disruption become reciprocally destructive and result in negative effects on physical and emotional health. “It is therefore very interesting that access to running wheels or other forms of voluntary exercise in animal experiments has emerged as a powerful environmental factor influencing brain health, circadian rhythms, and emotional well-being,” he said.

Glass agreed, noting that exercise is important in the non-photic regulation of circadian timing. “Restricting animals from exercising,” he said, “such as blocking access to a running wheel as we did in this study, had a significant stimulatory effect on alcohol consumption.”

“In this study, we found that the more the hamsters ran, the less they consumed alcohol,” said Glass. “The lazier hamsters that did not run as much had a greater craving for and consumption of alcohol, suggesting that exercise may be an effective, beneficial, and non-pharmacologic treatment option for alcoholism.”

“It seems that alcohol intake and voluntary exercise represent two forms of inherently rewarding behavior,” added Rosenwasser, “and the rewarding effects of these two behaviors may partially substitute for one another. This finding suggests that the two behaviors are regulated by overlapping systems in the brain.”

Glass agreed, noting that exercise appears able to alter the chemical environment of the brain in a manner similar to alcohol. “Dopamine is the primary chemical released within the brain in response to any type of reward, including exercise, drugs, food, and sex,” he said. “For humans, exercise may be an effective, beneficial, and naturally rewarding substitute for any type of addiction. It may also reduce the risk of addiction in individuals who have a family history of it, in addition to significantly reducing the risk of cardiovascular disease and mood disorders. But like all rewards, exercise should be used in moderation, and not interfere with an individuals normal daily functioning.” 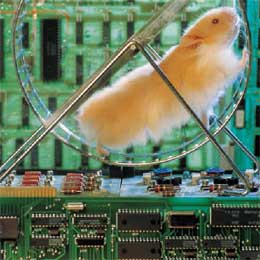 A second key finding was that hamsters that displayed greater sensitivity to the disruptive effects of constant light on circadian rhythms also craved alcohol less. “Thus, there may be an underlying genetic predisposition for alcohol dependence and abuse that is expressed under challenging circadian conditions,” said Glass, “such as shift work, sleep problems or repeated jet-lag exposure.”

“Several research groups have recently become interested in relationships between circadian clocks, exercise, and alcohol and drug abuse,” said Rosenwasser. “In general, research in this area has shown that alcohol abuse can dramatically disrupt biological rhythms, that these disruptions can promote subsequent alcohol abuse, and that exercise is an important environmental factor influencing both circadian rhythms and alcohol drinking. These studies have opened several new directions for alcohol researchers, and raise the hope that circadian-based and/or exercise-based interventions may be developed for improved management of the serious and debilitating disorders associated with excessive drinking.”

“Many members of the general public, and indeed, many medical professionals, continue to view alcohol abuse and alcohol addiction as character flaws and as failures of willpower,” said Rosenwasser. “Findings such as these help put alcohol abuse disorders in a broader biological context, and show that both physiological and environmental factors contribute to excessive alcohol intake. Accordingly, these physiological and environmental factors will need to be addressed in order to effectively control alcohol abuse and other forms of excessive behavior.”